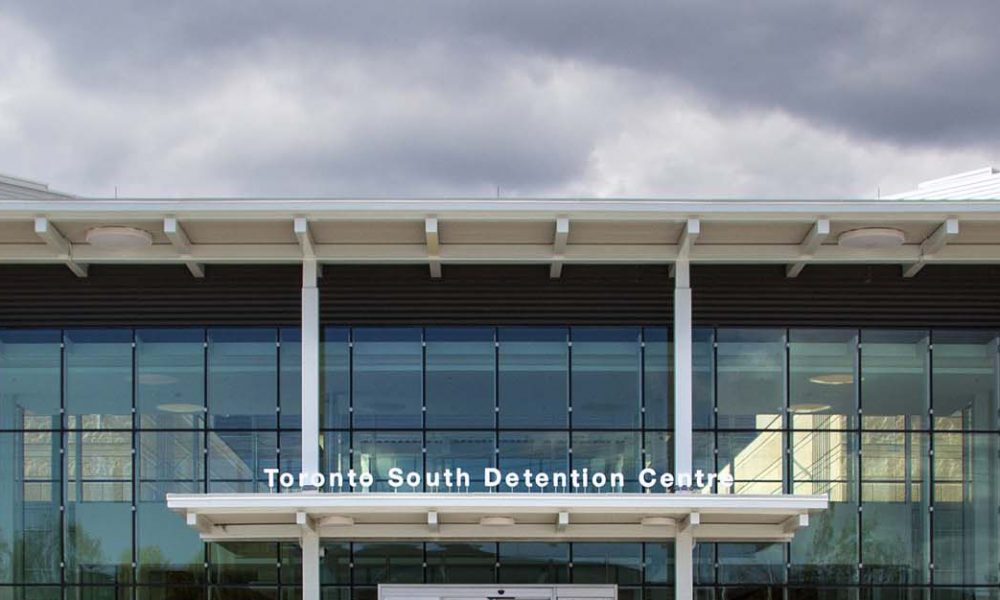 The TSDC, which officially opened in January of this year, is comprised in part of prefabricated concrete cells, which were assembled on site. The prison is part of the Ontario Ministry of Community Safety and Correctional Services ongoing effort “to build new, state-of-the-art facilities with ultra modern features and advanced technology that enhance public safety and internal safety and security.” The 1,650-bed facility is thoroughly modern in design and  includes a mental health assessment unit, a special needs unit and an area devoted to Aboriginal programs. Inmates are also able to spend time with visitors through on-site video teleconferencing technology (though in-person visits are permitted in special cases).
The new facility may be a model of modernity, but it is still primarily designed for incarceration, and as such features a highly robust security infrastructure — one that was recently recognized by SP&T News’ editorial advisory board as an outstanding example of security integration. The firm responsible for that integration is Mississauga, Ont.-based Habtech, this year’s recipient of the Security Integrator of the Year award, sponsored by Anixter Canada. Judges recognized the scope of the project, as well as its complexity, plus Habtech’s ability to work with a broad range of stakeholders and contractors.

For Habtech, its approach was not unlike the prefabricated cell strategy — much of the hard work was done before any of its employees even set foot in the jail. Everything had to be tested and proven well before it could be installed on site. “I think the big thing for the project in this case was that there was so much detail done with the customer before we actually got on site. A lot of the things were cleared up before we ever got there, so it made it a lot easier,” says Don Connor, general manager for Habtech. Habtech was involved with the project from the outset. As part of a P3 (public-private partnership) team led by Fengate Capital Management and general contractor  EllisDon, Habtech was selected through a competitive bid process to work on the electronic security aspects of the TSDC. “In the first steps, as far as Habtech’s integration goes, what we had to do was come up with some sample products for the ministry to review so they could see [what it was going to look like] and how it was going to feel,” says Connor. “We had a lot of meetings with approximately 10 to 15 representatives of the customer. . . . We had to get all the PLCs (Programmable Logic Controller) and all the integration up and running and be able to demonstrate that it all worked at the same time. We had 29 PLC panels connected and running and functioning.” Habtech was ultimately responsible for the integration of numerous security subsystems, including CCTV, door control, a perimeter and intrusion detection system, fire alarm, lighting and power control, the public address and intercom system, as well as the aforementioned video visitation system. The company also developed a GUI for touch screen control systems and digital recording systems. Products deployed include technology from Axis Communications, Pelco by Schneider Electric, Genetec, Aimetis and Notifier by Honeywell. The infrastructure was designed using Wonderware — a first for Habtech since it usually uses its own custom software. Another first was integrating with the facility’s elevator system. “We had never done integration to elevators at this level in the past,” says Connor. “It’s probably the most complex project we’ve ever worked on.” Habtech had to work with several other parties also contracted to work on the site, including several U.S.-based security consultants, EllisDon as the general contractor, as well as Habtech’s own sub-contractors which dealt with conduits, wiring, etc.
There were also two phases to the project: Designed for inmates serving weekend sentences, The Toronto Intermittent Centre is a separate facility but part of the TSDC framework. It was up and running several years earlier than its big brother. While a great deal of the work was accomplished before installers were on site, effective communication was essential at all times. “With the size of the building and the number of IP-based systems that there are —
not just ours but those of the subcontractors — it was a very in-depth endeavor to make sure that we didn’t cross paths and have systems corrupt each other,” says Connor.
There were, of course, regularly scheduled meetings between all of the stakeholders, but there were also “a lot of informal meetings and a lot of walking around the job site.” “Because we go last, our schedule gets really, really condensed,” adds Mike Godara, Habtech’s vice-president. “We only put up devices after the walls are painted. To finish in that period was a challenge. We had to deploy multiple testing teams and partition the system for testing, and then test the entire system together.”
As a P3 project, TSDC is covered by a Design, Build, Finance and Maintain (DBFM) contract, and as general contractor, EllisDon was responsible for the Design Build portion of that. “EllisDon was the GC on the project. It was our team that pulled together the bid,” explains Geoff van der Lee, director of special projects for EllisDon. “Habtech was brought on board as a design-build partner. . . . They were involved from Day 1. They were on board right from ground-breaking right up until completion.” This is the fourth prison project van der Lee has been directly involved with and “every single one of them gets more complicated than the one before,” he says. “The one that we constructed in Toronto South is very integrated, very electronic-security driven. There are checks and balances and controls on pretty much everything.” But, like any major project, there were some stumbling blocks along the way, says van der Lee. Meeting the scheduled completion day was a challenge, he says, particularly considering the timeframe and the fact that the project comprised two major components that were completed years apart but still had to be fully integrated. There were times when not everyone involved saw “eye to eye,” and “there were a few teething issues, as you might expect on a project of that size,” says van der Lee, but ultimately it’s the end result that matters most. “The success of the project speaks to how well the team worked well together,” he says. “Generally, everything worked very well.”
He credits much of the success to the preparation work performed by all parties involved, including Habtech’s diligence before actual on-site work. “Generally the commissioning went well,” says van der Lee, “and [Habtech] had most of the issues resolved before the materials hit on site. We ended up doing a lot of the software testing off-site at Habtech’s plant, so that by the time it actually arrived, it was, in essence, proven. “Mike’s crew has been great,” adds van der Lee. “There’s been a lot of . . . issues to deal with that a lot of people have worked very hard to fix and make sure work properly and satisfactorily to the ministry. I can’t fault them in any way for the service they’ve
shown.”

Habtech has been working in the security integration field for almost a quarter century, much of it in corrections. Due to the nature of the work, the integrator isn’t used to the spotlight, so to have a major project recognized by an award is a rare treat. “We kind of keep to ourselves and don’t talk a lot,” says Connor, “but it’s nice to be recognized as Security Integrator of the Year.” For Godara, the award is the perfect way to cap off a career. He is planning to retire next year and the TSDC project is a highlight amongst his life’s work. “I’m glad we finished it and it came out great,” he says. “This will be the thing that I always remember. I’m an electrical engineer and automation is my field. This being the most automated system, it gives me pleasure to be able to do in my career what I was trained for. Being recognized for our work is an honour.”